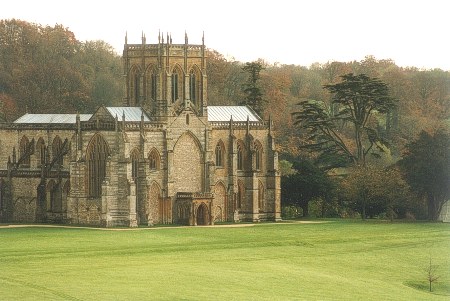 AbbeyMilton Abbey occupies probably the most beautiful setting of any church in the county of Dorset.  It rests in a natural amphitheatre surrounded by delightfully wooded hills.  The first church was established here in 933  by King Athelstan, the grandson of Alfred the Great, to commemorate his brother lost at sea.  Legend has it that Athelstan was responsible for the death because he thought his brother was plotting to take the throne and had him cast adrift in a boat with neither oars nor sail.  Almost certainly prompted by guilt, he endowed the Abbey with the income from sixteen manors in Dorset and several important relics of saints from Brittany, thus ensuring a generous income from pilgrims. King Edgar (959-975) sacked the secular priests and replaced them with Benedictine monks in 964.  It has been suggested that it was still quite a small establishment consisting of a stone church with the monastic buildings constructed from wood.  The Trust gratefully acknowledges images and text by Robin Adeney ©