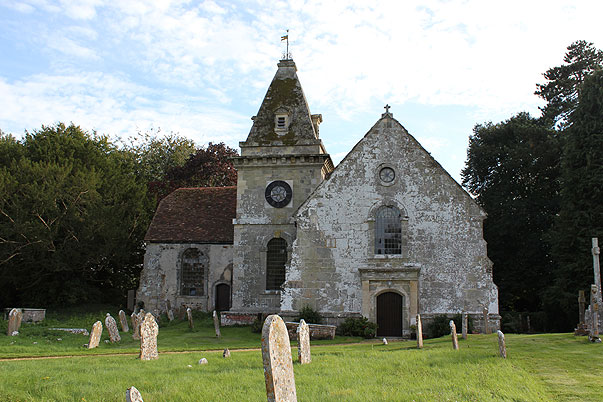 In AD. 961, a Benedictine abbey was founded at Horton.  It had a chequered history and was from time to time damaged and plundered.  Nevertheless it survived in various forms until the Dissolution of the Monasteries when it was surrendered to Sherborne Abbey on 18th March 1539 and the Priory church became the Parish church.  The rare dedication is to Wolfrida, who was the first abbess.

By 1720, the building had been allowed to decay to a ruinous state and in 1722 it was almost entirely rebuilt.  Externally, the most impressive feature is the tower with its pointed roof and heavy cornice that has a very strong resonance with the eminent C18 architect, Sir John Vanburgh (1664-1726).  These features are so similar to his designs for the unfinished Eastbury Manor House at Tarrant Gunville that one wonders if he had, in fact, designed them or perhaps someone in his employ.

Inside, the 'L' shaped layout is slightly strange, making it impossible for some of the congregation to see the altar.  There is a splendid plaster and gilded C18 reredos, with a Dove in the centre symbolising the Holy Spirit.  The four cherubs are said to have been modelled on the vicar's four children, who died in infancy.  There are two excellent effigies, thought to be C14, of a cross-legged knight and his wife.  The organ is impressive.