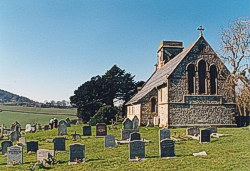 This interesting Victorian church sitting on an exposed hilltop site next to a primary school was originally built in 1841, but re-modelled, apart from the tower, in 1884 to a design by G. Vialls.

Inside, the building is simple with the chancel arch just suggested by Purbeck marble columns, but it does have a south side aisle.  The chancel pews and red wall lamps were designed by Thomas Hardy, the celebrated novelist.  The church silver was given to the cathedral at Juba in the Sudan.

Most impressively, when this contributor visited in March 1995 the offertory box had been wrenched out of the wall, but still the church was open for visitors - surely an example for others.