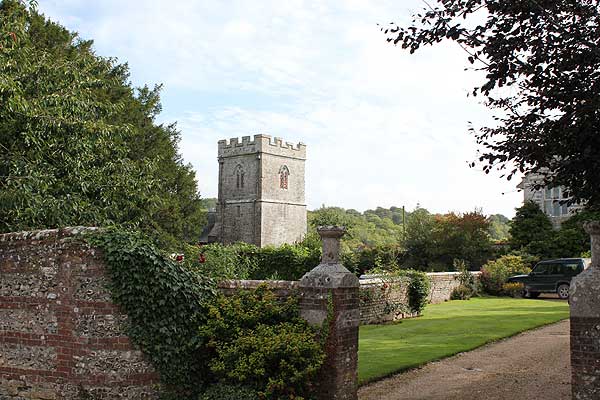 The Parish Church of All Saints stands in the S. part of the village. The walls, except in the tower, are of knapped flint with bands of stone; the tower is of coursed rubble. The nave is roofed with Westmorland or Cornish slates and the other parts have stone-slated roofs. The main N. doorway and a doorway at the W. end of the S. Aisle have reused 12th-century chevron mouldings, probably from a single 12th-century doorway; the Nave therefore is probably of 12th-century origin. The Tower was built late in the 14th century. The Chancel is of the late 15th century and the North Aisle was added early in the 16th century. The North Porch is of the 18th century and the Vestry to the W. of the porch is of the 19th century. The South Aisle arcade is evidently a 19th-century insertion, presumably of 1872 when restorations are known to have taken place; however, a S. aisle was already in existence in the 18th century (Hutchins II, 612) and the surviving masonry appears to be mediaeval. The organ chamber was built in 1880.