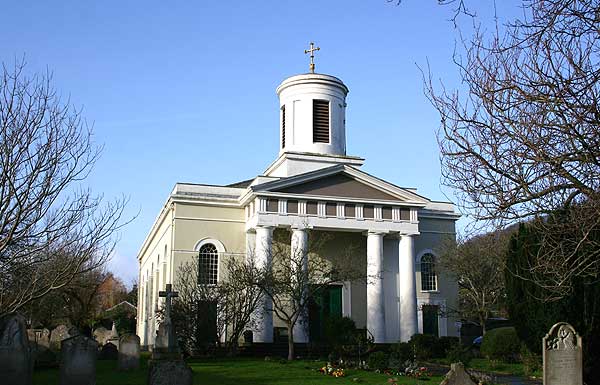 Towards the western end of Bridport lies the suburb of Allington, notable because of its proximity to what was the Gundry Rope Works, once the town's principal employer. The older houses, arranged mainly along the north/south road, were built to accommodate the artisans. The church of St Swithun, which is set dramatically back at the southern end of this narrow road, is an unexpected surprise. The brilliant white rendered building is by any standard magnificent with an impressive portico supported on four Tuscan columns with a circular cupula above and described by Sir Nikolaus Pevsner as having "a delightful front." This is the work of Charles Wallis in 1826-7. Internally, the building is rectangular with a flat white ceiling. Nevertheless, on entry the eye is naturally drawn forward to the large and very striking crucifix that hangs above the central altar. Either side are chapel altars and, being a high church, facilities for reserving the sacrament. There is a gallery at the rear which stretches across the entire width of the building and supports the splendid organ.   The Trust gratefully acknowledges images and text by Robin Adeney ©