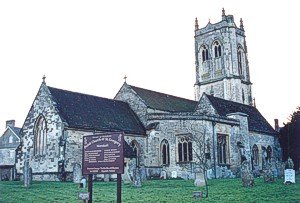 Marnhull is a hill-top settlement and stands above the river Stour.  It was once a place famous for bull-baiting, which took place on the 3rd May each year and was very popular until "put down" in 1763 because of the very bad behaviour of the spectators.  Later in that century, the rector wrote that the place was renowned for its tall people, both men and women.  Thomas Hardy made the village 'Marlott' in his novels and the home of one of his most famous heroines, Tess of the D'Urbevilles.

The church is very impressive with a splendid 15c tower that can be seen for miles around and regarded by some as the finest example in Dorset.  There is a lone Norman pier, decorated with scallops and masks, in the north arcade, which indicates that there must have been a substantial building on the site from that period.  However, the present church is essentially 15c and the richly coffered roof of the nave also belongs to that century.  The Victorians re-built the south wall and installed the south arcade in 1852.  They improved the chancel in 1882, although the east window had to wait until 1911 for glass by Morris & Co.

The mural painting of the Creed and the Lord's Prayer above the chancel arch is from Queen Anne's reign (1665-1714), although whether this was paid for by her Bounty (the result of a strong resurgence of Anglicanism) is not clear.  There is a rood-loft stairway on the northern side of the arch.  This would have led to the rood loft stretching across the chancel arch and on which would have stood figures of the Cross, St Mary the Virgin and St John the Baptist.  The oak screen below the west gallery is from the Charles I (1600-1649) period and on either side are traces of Consecration Crosses.  During the Middle Ages, it was common to incise twenty-four into a church,  three on each internal wall and twelve outside.  The bishop who consecrated the building would anoint each one with the words 'Sanctifecetur hoc templum' (blessed be this church).  This was a visible sign of dedication and a defence against the powers of the Devil.

The Nottingham alabaster effigies on an altar-tomb depicting a knight in armour with a woman on either side, have been near certainly identified as John Carent (senior), who died in 1478, with his two wives.  The somewhat mutilated state of the work is thought to have been caused by the theft of alabaster to make dies for coins.

Sir Nikolaus Pevsner declares that the font is ".....an enormous, uncouth square block with top spurs...."!  However, it was almost certainly made from the great stone of a wayside Cross.  The references are all coy about giving it a date.

The church at Marnhull has been blessed with two families who have provided quite astonishing service through successive rectors.  Three generations of Glissons put in 106 years during the 17c and 18c and the Place family 107, one of them, Harry Place, managing 50 years.

This is a wonderful church that amply rewards a visit.