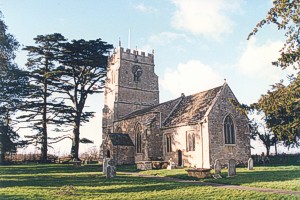 Hardly a village, more a large hamlet, Lydlinch sits on top of rising ground with the river Lydden running below and consists of a collection of houses either side of the A357 road and one road running at right angles to it.  Yet, set back in a delightful churchyard, framed by old trees, stands a  most attractive and unspoilt ancient church.

It is perpendicular in style and predominately 15 and 16c.  The venerable tower complete with a clutch of gargoyles is certainly from the 15c when most of the better towers in the county were constructed.  Immediately above the porch, with its 16c door, is a sundial and above that again is another attached to the tower.  Inside, the building offers an air of lofty spaciousness, which is most apparent when viewed from the 19c gallery at the rear.  This is a unique structure because it is supported on wooden pillars, painted to resemble stone, and has a front constructed, in part, from cast iron.  At the back there is a surprisingly small organ. The high chancel arch with a wooden cross supported on a beam is very striking.

On the southern side of the nave, the 1838 stone arcade is very pleasing.  Above and between the arches hangs a really excellent hatchment.  Hatchments are generally thought to have started in the 17c and were diamond shaped painted with a deceased person's coat of arms.  These formed part of an elaborate funeral heraldry and were hung outside the house, sometimes for the duration of the period of mourning, before being moved permanently into a church.  The practice continued into the very early years of the 20c with a slight increase in the size of the later versions.

The pulpit is early 19c and the 12c font, under the gallery, is fashioned from a square block decorated with arches.

Two people are particularly associated with this church.  Perhaps the more famous is Parson Barnes the Dorset poet, who spent his childhood years on a nearby farm and who went to school in Sturminster Newton.  He left a well-known poem about the church bells. (See Winterborne Came). The second person is commonly known as 'The Lady of Lydlinch'.  Legend has it that she was born and brought-up in West Parley during the 14c.  In due course, she married a man from Lydlinch where she lived for the rest of her life.  However, her heart was always in West Parley and when she died, she left instructions that her heart should be buried there.  During restoration of the West Parley church, a 14c urn was found and placed in a glazed niche, behind bars, in the outside of the east wall where it can be seen to this day.  Outside the porch at Lydlinch church there is an ancient tomb with the following words inscribed:

'Here lie the remains of a lady who gave the rector of this church for ever one portion of 'tyths' arising out of Dudsbury farm in West Parley and another out of Knowle farm in Woodlands'.

Such generosity; it seems a shame she was so modest that we do not know her name.

This is an exceptional church that handsomely repays a visit.