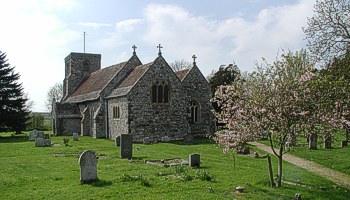 This must be one of the oldest settlements in Dorset, because archaeological items, such as pottery and a polished axe, have been found in the neighbourhood, which belong to the Neolithic Age or about 4,200 years BC.  The Iron Age fort of Badbury Rings is just 1½ miles to the north.  When the Romans arrived, they built a road between Dorchester and Old Sarum and the present village high street closely follows its route.  A few yards to the south-east of the church, it forded the river.

The village cross, opposite the pub, is probably Saxon in origin and survived until 1880 when it was destroyed in a brawl.  The stump remained until 1920, when what was left was converted into the war memorial.  Before churches became common in almost every village, wandering friars would preach to a gathering of people.  When a popular spot was established a wooden cross was planted in the ground and in due course these were replaced by more permanent structures made of stone and often equipped with steps so that the preacher could be heard over the heads of the gathering.  There are numerous examples in Dorset.

This most attractive and tranquil church dates from the late 11c and early 12c, but all that remains are the two arches in the north wall and the north porch doorway.  The tower is an excellent example of 14c construction.  Along with many churches in the county, towards the end of the 19c, the building was in such a ruinous state that it was in a real danger of collapse and major restoration was required.  In 1880, the vicar, Rev. and Hon. A.G.Douglas, promoted the project and it was completed largely through the help of the villagers, who gave their services after work.  The late Norman Purbeck hexagonal marble font, originally in the centre of the church, was moved to its present position under the tower during the restoration.  The magnificent iron cover, described by Sir Nikolaus Pevsner as 'exuberant' dates from this period.  The floor of the chancel and sanctuary were raised to avoid flooding and the decorative Minterne tiles were given by the Bishop of Ely.  The east window and reredos are by Clayton and Bell and given by Augusta Bankes.

The Rev. Douglass was the younger son of the 19th Earl of Morton and a cousin of the Bankes family of Kingston Lacy.  He left on his appointment as Bishop of Aberdeen and Orkney in 1883.

Before leaving, notice the recently restored table tomb in the church yard on the southern side of the path.  Very unusually, this has a stone top and ends, but the sides are constructed from brick.  It was built as a memorial to a Mr Baskett, who was a local surgeon, and for his wife and children.  The deceased were loaded into the tomb through the end.

There is an excellent guide for this fascinating church.