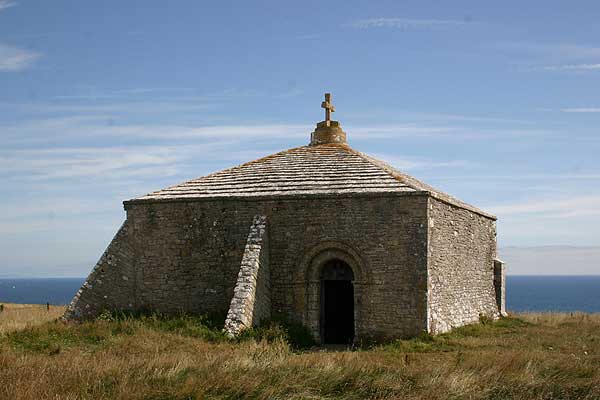 It is a long walk from the car park to St. Aldhelm's Chapel at Worth Matravers, but well worth the effort.  This small squat building sits above the cliffs on a headland adjacent to a line of coastguard cottages and a modern observation point.  It is a dramatic place and this little church harmonizes well with its setting.

It is Norman and square in plan and lit only by the doorway and a single slim Norman window.  There is a mighty central column that supports impressive vaulting, otherwise, apart from the simple altar, it is quite plain inside.  The size of the column has given rise to some conjecture, because, being much larger than required to carry the roof, it probably supported a now-lost structure above.  This might have been a bell tower or even some sort of navigation fire for shipping.

The origins are largely lost, although it is known to have been served by a royal chaplain in the time of Henry III (1216-1272), who was paid 50s per year.  By the end of the C18 it had ceased to be used as a chapel and become dilapidated.  It was repaired before 1807 by William Morton Pitt and completely restored by Lord Eldon around 1873.

In 1964 the Encombe Estate donated the building to the Worth Matravers Parochial Church Council and services are now held regularly.