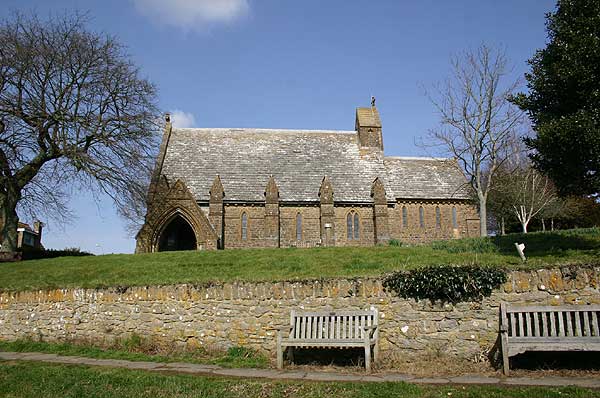 This most attractive church, an early example of the Arts & Crafts movement, was consecrated by Rt. Rev. John Wordsworth (Bishop of Salisbury 1885-1911) on 17th January 1890 to replace an old building. The architect was Edward Prior, who had designed the remarkable Pier Terrace of 1885 at West Bay when he was only 33. It is cleverly sited slightly above the village, but below the adjacent hill.The church is entered through a southern porch via an ancient oak door transferred from the 'old' church. The interior is truly stunning. The aisle sweeps up towards the chancel and above, three huge pointed stone arches leap across the interior from almost floor level in a very pleasing and theatrical fashion. A fourth arch is integral with the west wall and massive oak arches are employed in the chancel roof to form an immensely strong and visually attractive structure. The nave, which is only 48 feet long, is lit by lancet windows on either side with a rose window high on the west end to give further light.The Trust gratefully acknowledges images and text by Robin Adeney ©The stone pulpit, which is reached from behind, was encased in carved oak panelling by E.H.Gilbert of Bridport in 1904 to hide painted decoration by Macdonald Gill, whose work had ceased to find favour by then. The communion table was a gift of the architect and probably by A.H.Mason, a cabinet maker associated with the Arts & Crafts movement and carries a front panel in painted gesso by W.R. Lethaby The church guide says the east window is by Christopher Whall who is much associated with the movement, although Sir Nikolaus Pevsner suggests it is probably also by Lethaby. The chancel screen of 1910 in wrought iron is by R.B.Williams & Sons of Bridport. The magnificent font was a gift from a churchwarden at the time of the consecration and is in the form of an alabaster bowl supported by forest marble columns on a base of alabaster, in turn mounted on circular steps of blue Keinton stone. There is a most beautiful lectern, not mentioned in the guides, but well worth noting. The seating is of 1966 and specified as 'Coventry Cathedral' type.There is a superb village and church guide by Cyril Kay, twice a churchwarden of the church.