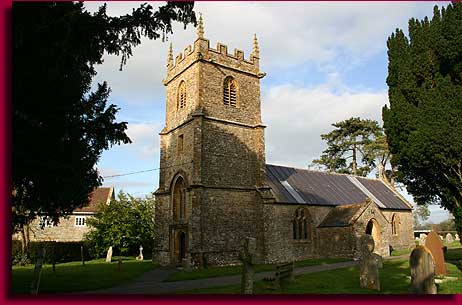 LeighThe hamlet of Leigh rests on Oxford clay and it is a feature of this soil that settlements tend to be small with several quite scattered farms.  Another feature of clay is the width allowed between hedges, which is usually much wider than on better draining soils.  This was because before the days of a metalled surface to roads a greater area was needed to avoid becoming completely bogged down in wet weather.The church, like so many in Dorset, still has its C15 tower replete with some splendid gargoyles.  The nave and chancel are the result of a Victorian restoration in 1840.  This was to a design by R J Withers of Sherborne, whose only other recorded churches are St Nicholas at Hilfield and St Mary at Melbury Bubb. There is an impressive bench end probably dating from C16 and a good font.Leigh is also famous for its miz maze.  Centuries ago, these were a common place amusement and consisted of an intricate arrangement of low banks and trenches, through which local lads would wander at certain seasons of the year.  Nothing now survives apart from a low bank and ditch.  It is very small.  Other examples can be found at Pimperne and Troy Town.  The English for maze is "caertroi" and "troi" means "turning".  This must be where Troy Town derives its name. The Trust gratefully acknowledges images and text by Robin Adeney ©