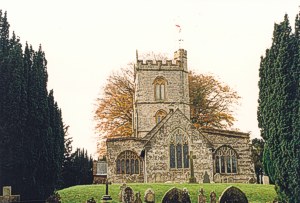 HiltonThe attractively rural village of Hilton lies in a fold in the chalk downland beyond the mighty Milton Abbey.  This is a quiet place and the church is tranquil too.  The present building, thought to have been erected in 15c, almost certainly replaced an earlier version because there is evidence of both Saxon and Norman masonry.  The Victorians carried out a careful restoration in 1890. On the outside, on the south side, beside the priest's door into the chancel is a dole table below the window.  Widow's loaves would have been placed on this shelf.  Note, the sundial dated 1690 above.Inside there are a number of very important items.  The windows in the north wall are thought to have come from the cloisters of Milton Abbey after the Dissolution (1536 - 40).  There are two Medieval painted panels hung on the walls of the tower and are regarded as the finest in the Diocese.  At one time they formed part of a very large screen at Milton Abbey, but were removed in 1774 and restored by James Wyatt before being given to the church.  The images are of ten of the Apostles ( Judas Iscariot has been replaced by St. Matthias, St Paul has been added.  Only St. Bartholomew is missing).The pulpit is Jacobean The Trust gratefully acknowledges images and text by Robin Adeney ©