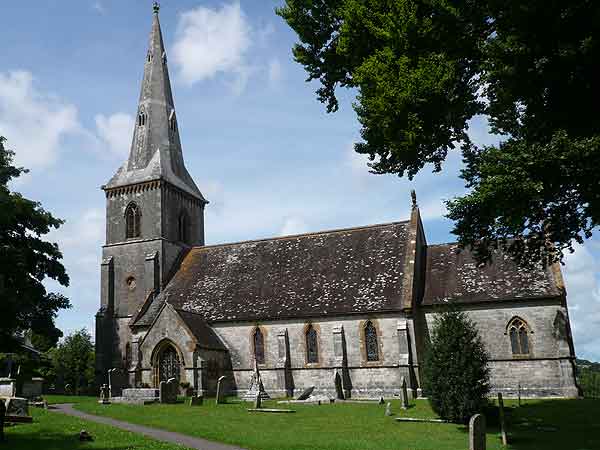 This is a rather splendid and impressive church when glimpsed from the Dorchester - Yeovil road.  It is generous for the small village clustered around.  Happily, Decimus Burton's design of 1849-51 certainly does not disappoint from closer inspection.  Perhaps the most appealing element is the recently restored and incredibly beautiful broached spire with two tiers of lucarnes.  The present form of the building owes its existence to Hastings Nathaniel Middleton, Lord of the Manor of Bradford Peverell, who despite unsuccessfully attempting to raise the cost by public subscription, most generously paid almost the entire £1,850 himself.  The imposing pulpit is in Caen stone with an access through the vestry.  The painted lettering on the chancel arch and elsewhere is by the Dorchester painter, J. Pouncey.  The triple lancet Chancel windows are by Nockalls J. Cottingham, who incorporated some late medieval glass from New College, Oxford.  This was a gift from the warden, Dr Williams, to his son when he became rector in 1850.

The present church replaced a much earlier building dating from around 1391, on the same site.  This structure featured a rather squat tower and a porch of 1552.  Although rediscovered in 1849, sadly there is now no trace of the medieval mural of St George, which, at some earlier stage, had been hidden under plaster.

Perhaps the most illustrious former incumbent was Dr Howley, who was inducted Rector in 1811.  However, in 1813 he was consecrated Bishop of London and was one of the two men who roused the eighteen year old Victoria to announce that she was Queen in 1827.  A year later, he was elevated to Archbishop of Canterbury and died in 1848.

Jo Draper tells us in her quite excellent 'Dorset - The Complete Guide', that John Hutchins, the celebrated historian of Dorset buildings, was borne here in 1698.  He became vicar of Swyre and later, Lady Mary in Wareham