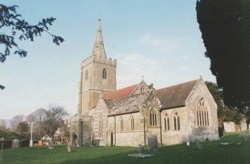 The Normans rebuilt the church on the foundations of an earlier one in 1100, but all that remains now are the massive pillars and rounded arches of the arcading to the north aisle, a single window, which may have been reset and the north transept.  There are sculpted corbels on pointed arches dividing the north chapel from the chancel, which are thought to be King Richard II (1377-99) and his first wife, Anne of Bohemia. The Trust gratefully acknowledges images and text by Robin Adeney ©