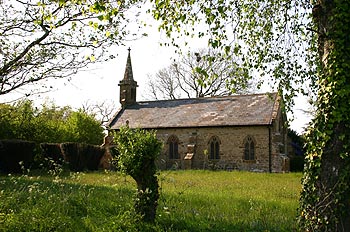 Pilsdon is an ancient place, taking its modern name from 'Pilesdone' in the Domesday Book of 1086, which probably meant a hill with a peak.  Pilsdon Pen, a mile away to the north is, at 908 ft., the highest point in Dorset, but the hamlet rests fairly sheltered at its foot.  This is delightfully rural countryside with only the thinnest scattering of houses.The most attractive yellow stone C17 manor house with mullioned windows is, by far, the most impressive building in the area.  It had a side role to play in the flight of Charles II after the Battle of Worcester.  After his abortive attempt to sail to France from Charmouth, he returned to Trent, stopping for the night in Broadwindsor.  However, his pursuers were convinced he had holed-up in Pilsdon Manor because it then belonged to Sir Hugh Wyndham, a well-known Royalist judge (see Silton).  Not satisfied with the owners denials, the troops, having turned the place upside-down to no effect, suggested that one of his daughters was Charles in disguise!  Having found that was false too, they rode off.  (For Charles's exploits see 'Charles II's 19 days by Jonathan Caseley)The exquisite little church of St Mary has C13 origins, with C15 windows.  Major restorations took place in 1830 and again in 1875 when Pevsner suggests the bell-turret was erected.  There is a simple tub font, a stoup and a canopied piscina.  The two carved stone figures on the north wall are interesting.  Today, the church has no pews, just straw bales to sit on and is used, several times a day, by the Pilsdon Community for their simple, yet incredibly beautiful, services.The setting of the church next to the manor house within a most attractive garden, brimming with flowers, makes this a truly inspiring visit.The Trust gratefully acknowledges images and text by Robin Adeney ©