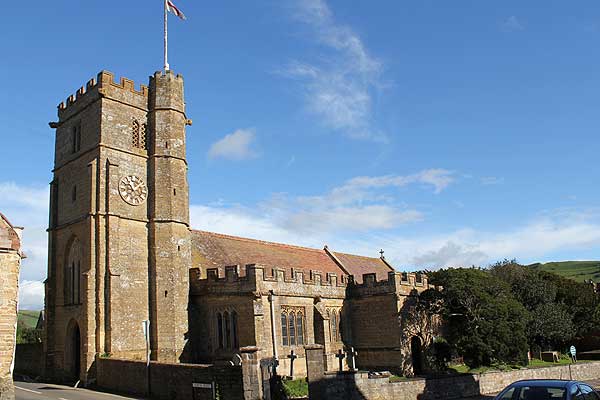 There has certainly been a church on this site since the 13th century (maybe earlier) and, being alongside the busy main road, it must have seen many changes from the stage coach to the roar of almost continuous modern traffic.  Yet this building really is a delightful sanctuary from the rigours of modern life.The nave is C13 and the north transept C14.  The building had to wait until C15 to receive a south aisle, the tower, the porch and the Arundell chapel for the Lords of the Manor.  The 1883 chancel and nave north windows arrived to a design by G.R.Crickmay of Weymouth.  The perpendicular font 14 or C15 has a flat bowl and a simple more recent cover.  The attractive organ appeared in 1892 and was originally placed in the Arundell chapel, effectively obscuring it.  However, in 1969 the instrument was moved to its present position.  The ornate cross, displayed in the chancel and shown right, came from Palestine where it was damaged when used by Christians to separate Jews and Palestinians.Detail of the black marble monument in the south aisle thought to be Sir John Chideock dressed in typical Henry VIII armour.This is a beautiful little church, well worth visiting.The Trust gratefully acknowledges images and text by Robin Adeney ©