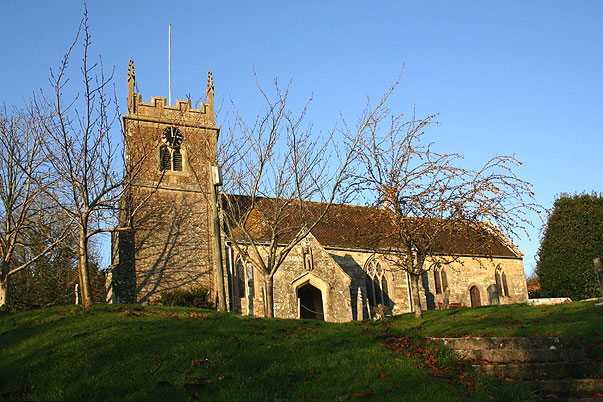 There is a legend suggesting that Christianity came to the area shortly after Joseph of Arimathea had established his settlement at Glastonbury.  Later the parish was linked with the monastic community of Marsh Court only a mile away.  What is absolutely certain is that there was a church on the site from earliest times and parts of the present building date from early C13, which is when the incumbents were first recorded.  As a result of the generosity of Sir Francis Stapleton, the Patron, in 1870 the Victorians restored and enlarged the church to a design by G R Crickmay of Weymouth. As with several Dorset churches, the chancel is out of alignment with the nave signifying Christ's drooping head on the Cross. The interior is classically Victorian with some splendid chandeliers.  In the north side of the chancel, there is a recumbent effigy of a knight not wearing armour, but clad in tabard and hose and said to be Alexander Mobray, who died in the village in 1410.  Font is C14.  Note the piscina with the beautiful flower shaped water outlet.There are two painted panels attached to the walls of the ringing chamber at the base of the tower, which at one time formed the front of a singing gallery.  These were painted by Sir James Thornhill FRS, the first painter to be knighted.  He lived in Stalbridge and was MP for Weymouth.  His other works include: the Dome of St. Paul's Cathedral: The Princess Apartment at Hampton Court: Kensington Palace and Blenheim. Hogarth studied under him and eventually became his son-in-law. The Trust gratefully acknowledges images and text by Robin Adeney ©