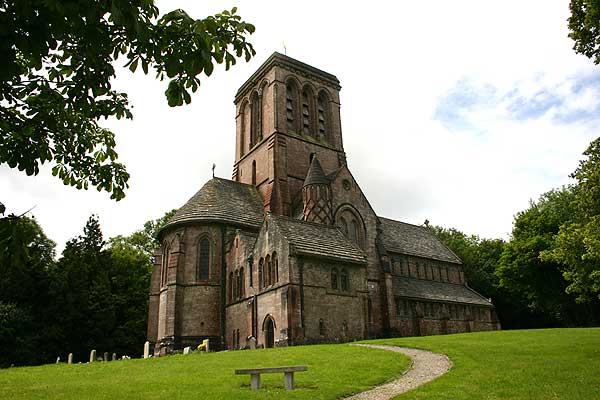 Kingston is unique in Dorset in that it has two Victorian churches. The first, designed by his son-in-law George Repton, now a dwelling, was built in 1822 by the 1st Lord Eldon to replace a small chapel. However by the 1870s the 3rd Lord Eldon felt it was his Christian duty to provide a new church and wanted something rather grander, despite only ever serving a relatively small parish. Others, less charitably, have said he built it as a personal statement of his wealth and prestige. Whatever the real reason, he has bequeathed the area an incredibly beautiful object that can be seen for miles around.

Entered through a western narthex, Kingston, popularly known as the 'Cathedral of the Purbecks', is a magnificent gothic revival church by the eminent Tractarian architect, G. E. Street, who is better known for the contemporaneous Royal Courts of Justice in London and several other important churches including St Peters in Bournemouth. The tall central tower, with its peal of eight bells, is a local landmark. The church shows the influence of French Gothic, but internally Street used local Purbeck marble for shafting. The chancel is vaulted in stone and has a fine wrought iron screen. The pulpit by Potter is another example of superb wrought iron work, all of which was executed to the designs of the architect. There is a very important three-manual organ by Maley, Young and Oldknow built specifically for the church and contained in the shallow north transept. The nave is tall and lofty, lit by a clerestory and, at the west end by a magnificent 12ft. rose window, designed by Street and executed by Clayton and Bell. There are no pews, just chairs. The hallmark of the building is certainly the highest possible quality even in the smallest details.

At the age of just 28, the third Lord Eldon, who lived nearby at Encombe, commissioned the architect to build his grandest church at a final cost of around £70,000. Although a fortune at the time, the work was undertaken entirely by the estate staff, thus providing employment during a period of depression. The stone was quarried on the estate and the timber was imported from Lord Eldon's Gloucester property. It was completed in 1880 and Street is reputed to have remarked "It is a pleasure to make work so much after one's heart as this will be; I think it is the jolliest church I have built". No expense had been spared to erect a monument notionally to the memory of Lord Eldon's great-grandfather, the first Lord Eldon (1751-1838), who had been the Lord Chancellor of Great Britain for 25 years during the reigns of both George III and IV.