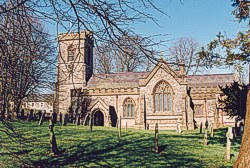 At first sight this appears to be a very large and impressive church for a comparatively small village.  The answer lies with the changing fortunes of industry.

The original church was dedicated in 1239, but by 1770 it was not large enough to accommodate 'the fourth part of the inhabitants' and eventually the present church, built in 1867 by Mr James Mountford Allen of Crewkerne, was designed to seat a congregation of 400.   200 years ago, the village was a centre for the wool trade and enjoyed a successful lace-making industry and a population of around 1,600 people.  However, it was down to 1,189 in 1871 and today is only 650.

The tower arch was salvaged from the old church, the font was refixed on a Hamstone pedestal, the old 17c high altar was placed in the Lady chapel, the 16c pulpit remounted and several pew ends re-used.  Also salvaged was a stained glass window, now in the south wall.

There are two brasses, one of a man and one of a woman from 1437 that are arguably the best in the county. The organ was given by the parish in 1967.  Perhaps Thorncombe's most famous sons were the Hood brothers, born in the 1720s, who both rose through the navy to be admirals, one becoming a baron and the other a viscount.

The parish started out in Devon as part of the Diocese of Exeter, but transferred to Salisbury in 1843 when Thorncombe became part of Dorset.  In 1982 it was transferred to Bath and Wells.