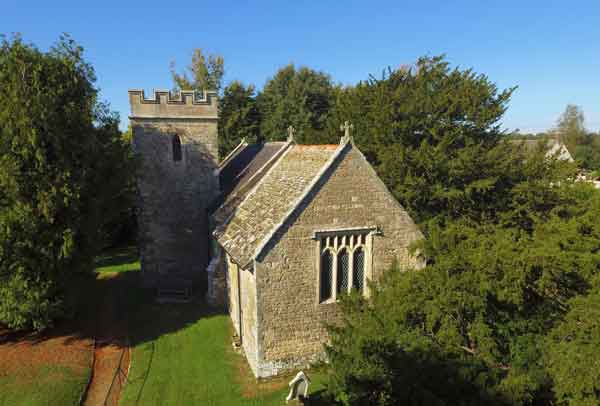 The little church has its origins in the 13c, and for more than 600 years, has been the responsibility of the Rector of Gillingham. However in 1840, like so many others in the county, the whole structure, including the tower, was rebuilt.  Some elements were salvaged, which included an 18c window in the east wall and in the chancel two widely-splayed lancets in the north wall and another one-light 13c window with a 16c trefoil head, plus another 14c window.There is a gallery, limited to 40 persons, across the west end of the nave. The pulpit and communion table are both 17c and there is a piscina.  The font is 13c.  The pine pews together with new floor tiles were installed in 1912.Outside, the entrance gate was improved with brick pillars and an ornamental arch to commemorate the coronation of King Edward VII (1901).  The exceptionally long handrail was installed in 1986 as a memorial.The Trust gratefully acknowledges drone image by Richard Noble and text input from Robin Adeney ©