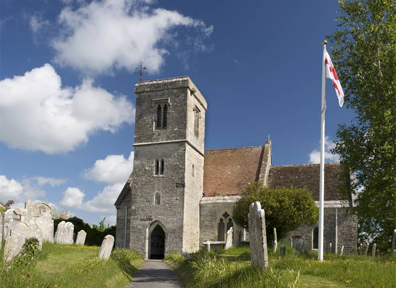 Broadmayne is a village dominated by the busy road, however the church standing back and slightly above is a haven of tranquillity.

The rather rare south tower, which was started in 13c, but not finished until 15c, is the only really old part of the structure.  The rest was rebuilt by John Hicks of Dorchester in 1865 – 6.  Perhaps the most notable items in this church are the sculpted corbels.  These take the form of angels and although very Victorian and somewhat wan for today’s taste do certainly express piety.  These are by Richard Boulton, whose work is to be found in several Dorset churches of this period.  An obviously very gifted artist, he was sufficiently recognised to have his work featured in the Great Exhibition and incorporated in buildings as far apart as Winchester Cathedral and the Courts of Justice in Bombay.