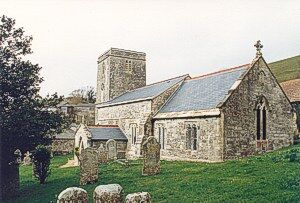 The hamlet of Bincombe lies in a fold to the east of a very sharp bend in the road from Dorchester to Weymouth.  This is seriously rural and the little church exudes peace and tranquillity.  There has been a building on the site for over 800 years although all that remains of that period are the blocked up north doorway and squint (hagioscope).  Note the rounded Norman chancel arch.

The south door is dated at 1779.  The Victorians extensively altered the chancel and raised the floor in 1862.  The furniture is of the same period.  The organ was originally in Broadwey church, but moved to Bincombe in 1901.

The Purbeck marble font is early (pre 12c) because careful inspection reveals the marks of fixings associated with a locked cover.  This was a requirement after 1236 to deter the theft of consecrated water for superstitious purposes.

The clock was installed as a thanksgiving after World War II.

In the churchyard lie two German-born soldiers of the York Hussars who were shot for desertion in 1801.  There was a large camp on Bincombe Down where the Grand Old Duke of York may have marched 10,000 men up and down the hill!