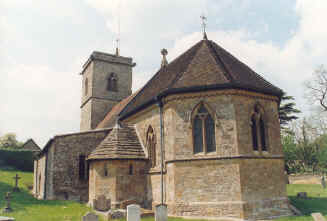 Originally, there was a Saxon church here of the traditional two cell layout and part of the nave wall, the north doorway and font still remain.  Unfortunately, some excellent murals uncovered in the 19c faded due to exposure to light.  There is a curious arrangement of windows in the north wall of the nave, which has come about as a result of various 'improvements'.  Two windows are 14c restored and the middle window is 16c.  When the 16c window was installed half of the nave window was destroyed, but in 1896 the window was moved and the other restored to its proper proportions.

There is a pleasing apse shaped chancel decorated with sculpture by the eminent Victorian stone carver, Benjamin Grasby, whose work can be found in many of the county's 19c churches.

The north doorway is a superb example of Norman craftsmanship and the door itself is also 12c and made of nail studded battens with strip hinges and moulded ribs.   The font is a simple Norman example with just a single band of cable ornament.

There is a good stone effigy on an altar tomb of circa 1340 and a wall monument to the Tilley family erected in 17c.  Attached to the north wall of the nave is a carved wing of an angel, which was blown off the cathedral at Amiens, Flanders during the First World War.  It was picked up by Major H.M.Warrand and presented to the church in 1961 by his daughter, Mrs. Urwick and is preserved there by permission of His Grace the Archbishop of Amiens.