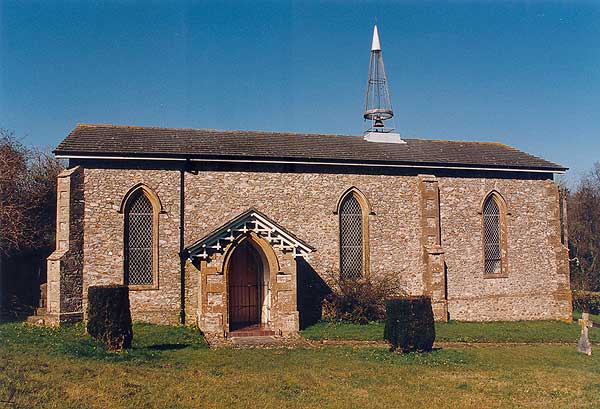 This is a simple chapel-style building serving a small community, almost hidden in a most attractive valley.  It was designed by E L Bracebridge (his only recorded church in the county) and built 1839-40. There is an impressive stainless steel spire on the roof, which has the effect of bringing the church very much up to date.  At the rear, a stairway leads to a blocked-up doorway that would certainly have led to a gallery, now no longer.

In 1958 the church installed electric lighting, but there was still an old iron stove used for heating. Then on 16/17 December 1961, in the time of Rev F B Horsey the church caught fire, and all that remained were the stonewalls. It was once thought it was the action of the Chard Fire Bug, but it was probably caused by excessive heat from the stove chimney, which had been lit for the next day’s service and which went up besides the gallery timber.

A citation for faculty to build the new church arrived in November 1963, but it was argued that the restored building rebuilt in 1964, by Spillers of Chard, should be designed for the dual purpose of church and village hall, but those supporters did not get their way. The architect Mr Stark of Jackson and Stark, Dorchester was responsible for the modern interior.

The walls were repaired and replastered on the inside; a new roof was added, complete with the stainless steel bell spire. The consecration service was held on November 29 1964 by the Ven, the Archdeacon Maddocks, and televised on Tuesday December 1st.

Inside the church is quite plain, but light and airy.  There is no pulpit.  The cauldron style font is imaginatively mounted in a steel frame and the lectern is worthy of close inspection.