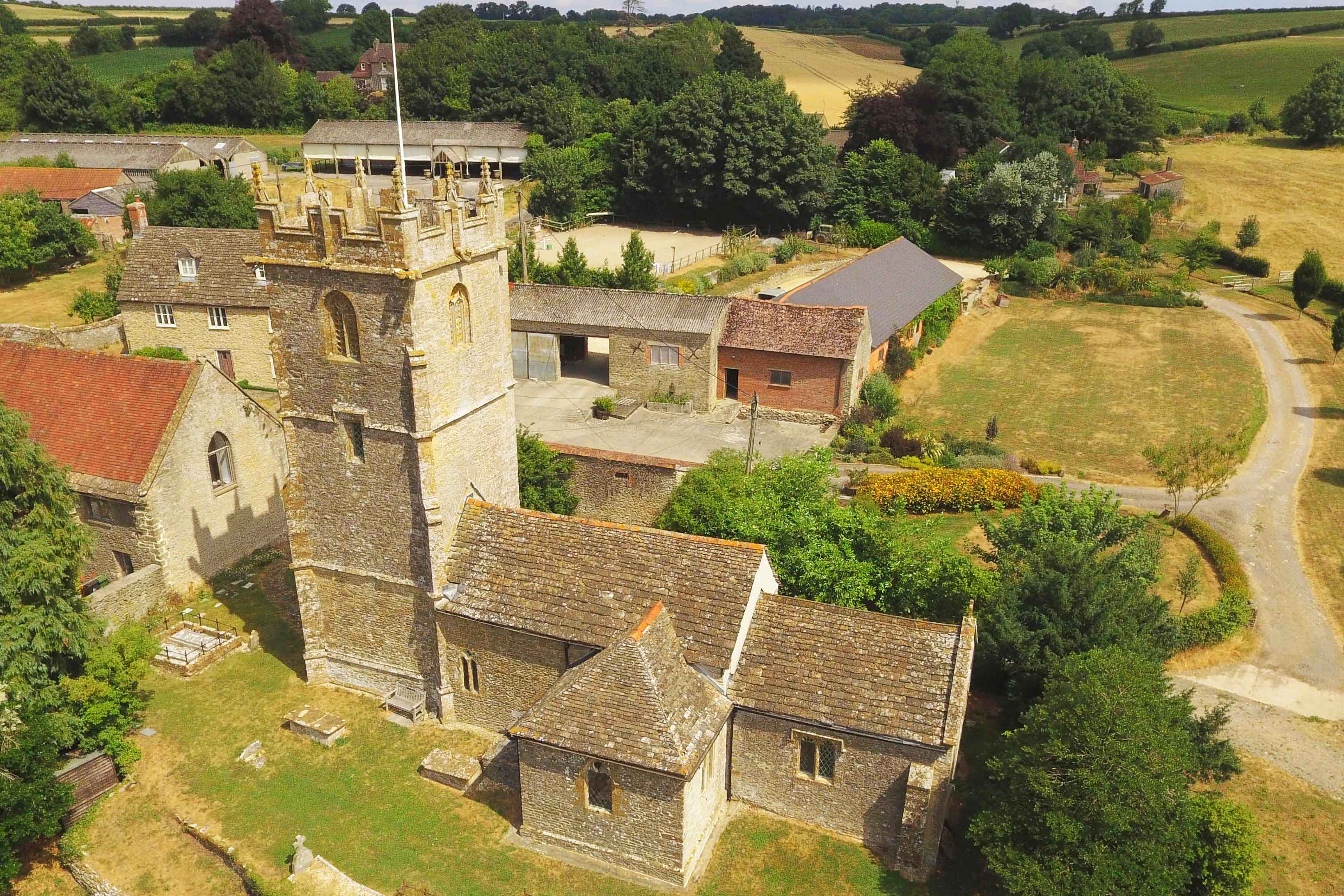 This is an ancient church in a tiny and most attractive hamlet just three miles from Sherborne.  According to Hutchins, the great Dorset historian, it was an out-chapel of Sherborne Abbey at the time of the Domesday Survey (1085) and may well have been a replacement of an even earlier wooden building.  To this day it remains part of the Sherborne benefice.The present nave dates from the 13c when it was thatched and was entered through a South doorway, complete with a stoup for Holy water.  However, this became redundant and was blocked-up when the small, but rather splendid tower was built in the 15c incorporating a new Western entrance. (Note the scratch dial on the South-West buttress).  Later in the 17c or 18c a new entrance with a porch was built on the North wall, which is what is used today.Inside and out, there are consecrated crosses cut into the masonry.  During the Middle Ages, it was common to incise twenty-four into a church, three on each internal wall and twelve outside.  The bishop who consecrated the building would anoint each one with the words 'Sanctifecetur hoc templum' (blessed be this church).  This was a visible sign of dedication and a defence against the powers of the Devil.  In this case, the fact that there are both internal and external examples indicate that it was done according to the English Rite and not that of Rome, which only required consecration on the inside. Although the nave was built in the 13c, the plastered barrel roof is from the 15c when the thatched roof was removed and replaced with stone tiles, necessitating heavier timbers.  The four bays each have four panels with moulded plates and ribs with carved bosses at the intersections.  (The central bosses are modern).>The chancel is almost certainly 15c, although the upper part of the arch may be 17c or 18c.  The 18c South chapel is now used as a vestry.  The octagonal font is late 15c and has quatrefoil panels on each face, which alternately enclose shields and roses: the wooden cover is 17c. The whole building was sensitively restored in 1848. Next door to the church is a tithe barn of 1600, which has been tastefully converted into a dwelling.This is a charming little church well worth a visit. The Trust gratefully acknowledges the basis of text by Robin Adeney and Drone photography by Richard Noble © DHCT 2018