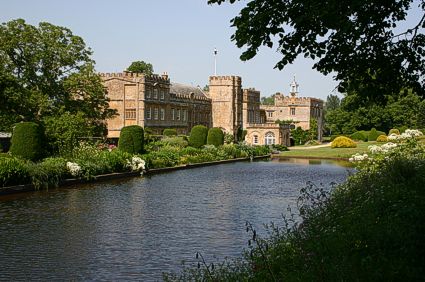 Forde Abbey lies in the remote extreme north-west of the County in an incredibly beautiful heavily wooded valley, which it shares with the river Axe. Unquestionably one of the most attractive houses in Dorset, it is surrounded by 30 acres of sumptuous landscaped gardens and ponds, making an assault on the senses that are both a delight and lasting memory.The ChapelThe chapel was formed out of the monk's chapter house, by Edmund Prideaux sometime after he purchased the property in 1649.  His architect (see below) carefully preserved the 12c ribbed vaulting and the Perpendicular window above the altar that was originally installed by Abbot Thomas Chard (16c).  Otherwise, the furnishings are excellent examples of 17c craftsmanship.  An impressive oak chancel screen divides the space. It is embellished with an attractive segmental pediment, gilded foliar decorative carving and superb pierced foliage above the double doorway.  On the northern side of the chancel is a small but very pleasing organ, which is said by Pevsner to be late Georgian Gothic.  Opposite, there is a truly magnificent pulpit, replete with its own oval window, which must be the tallest in Dorset!  Presumably it had to be this high so that the congregation could see the preacher over the top of the screen.  It is built into the wall and was commissioned by Sir Francis Gwyn sometime during the 18c.  Other items of great interest are the 12c pillar piscina and the impressive paneling and gilding including some rather glum cherubs.  High on the north wall of the chancel is a late 16c helmet with a bust above.