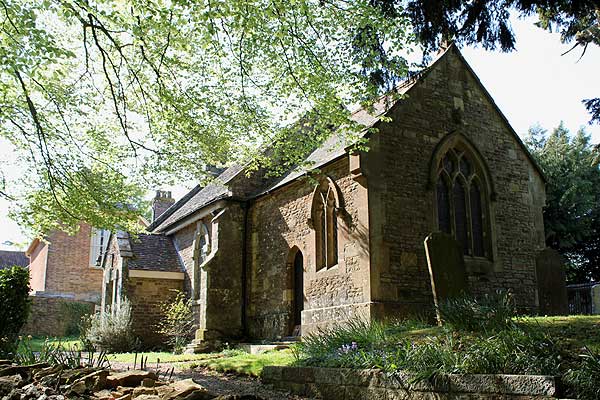 A haven of delightful tranquility, the village rests in a timeless wooded rural setting, with a name derived from its Domesday estimate of 'five hides'. The little church with its plain bellcote sits on raised ground adjacent to a large and rather splendid residence.

The first vicar was John de Purcombe, who was installed in 1298. Nothing remains of the original church because the oldest part is the C14 south wall and the chancel arch of the same period. There were major alterations in 1736 when the tower was taken down and the large round headed windows placed in the south wall. The rather plain oak pulpit with fielded panels is also from C18. The chancel is entirely of 1837. Note the piscina is unusually sited on the east wall.

The Purbeck stone font, on a green sandstone base, is C14 and was moved to its present position from beside the door in 1970. The beautiful richly carved lectern must be C19, although the guide books are coy about its origin.

This is a delightful church, which is well worth a visit.

Continuing east from the church the road crosses the river Divelish by a ford adjacent to an ancient, possibly medieval, packhorse bridge. The bridge is six foot wide and there are two six foot spans with pointed arches. One of only three in Dorset. (The others are at Rampisham and Tarrant Monkton)