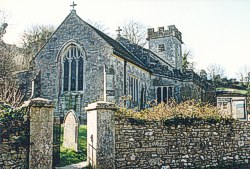 In a steep valley, this is an exceptionally beautiful setting for a church, even by Dorset standards.  The building itself is most attractive and worthy of its lovely site.  There appears to have been a church here since well before the Norman Conquest of 1066.  By 1243 a little chantry chapel was established by John Bayouse, whose family name was associated with the Bayeux tapestry.  The known list of priests extends back to 1267.

There is still a small section of the wall of the 13-14c building near the tower.  The porch and northern side of the church belong to 15 to early 16c.  Note the very important painted Tudor rose, which was re-discovered by Webb & Kempf in 1988, but was probably painted sometime after 1486.  The south aisle, south arcade and clerestory were added in 1838 and beautifully match their northern counterparts.  In 1906 the chancel was enlarged when a new organ chamber and vestry were built.

The first organ was installed in 1685, which lasted until 1895 when the present instrument, by William Sweetland of Bath, replaced it.  The font is Medieval, but has been damaged by over zealous re-cutting.  The pulpit is Jacobean.

There is an excellent guide available