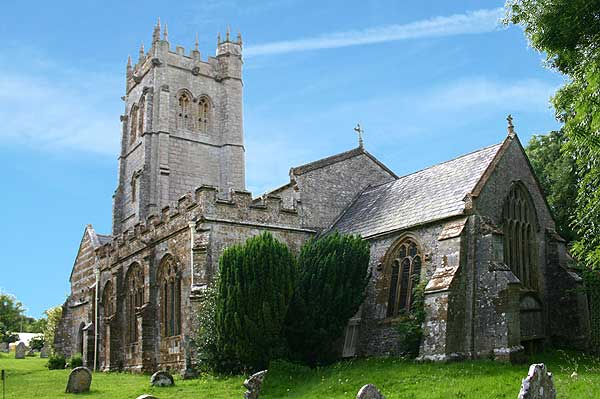 PiddletrenthidePiddletrenthide must be an early example of ribbon development as it strings along both sides the road that shares the valley with the Piddle river. From time to time roads lead off to the west and one of these leads down into a delightful suite of cottages that stand below the slightly unexpected, but nevertheless splendid village church.From the outside, the most important feature is the magnificent tower of 1485, replete with twin light bell openings, numerous pinnacles and terrifying gargoyles. Inside the porch is a doorway featuring a zigzag decoration, which confirms the building's Norman origins. The nave and aisles are C15. In 1852 the building was restored and the walls raised by John Hicks, who was the brother of the incumbent. This was Hick's first major commission since setting up an office in Dorchester. He went on to become the architect of choice, restoring and building more than 27 churches in Dorset, before his untimely death in 1869. The chancel is of 1880 by Ewan Christian.There are some excellent Victorian memorials.Outside, on the south east side of the chancel can be found two semi-circular headstones that mark the graves of members of the the Durbefield family, whom Thomas Hardy immortalised as the D'Urbervilles in 'Tess of the D'Urbervilles. The Trust gratefully acknowledges images and text by Robin Adeney ©