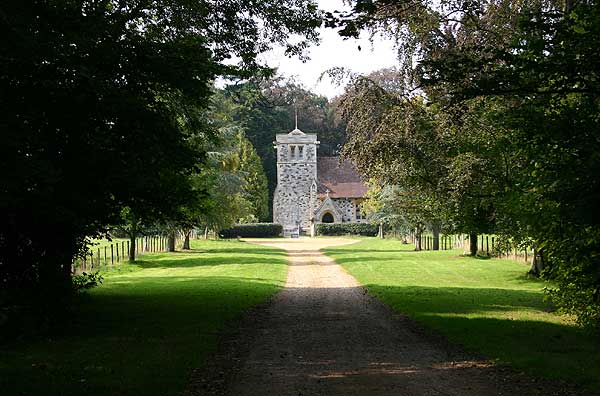 The rich colours and artistry used by Horace Wilkinson to convey Christ on the Cross with a serpent below, are inspirational.  The left hand panel depicts Ralph Bankes sitting on Christ's lap with his sisters, Viola and Daphne, looking on.  Mrs Bankes is reputed to have been devoted to her rather sickly son, but not to her two daughters. To the right, further panels of Mary and Martha, the Good Shepherd and the Calming of the Storm.  The south transept windows have the theme of childhood.  The surprisingly small organ by the Positive Organ Co., costing £175, was accorded its own loft above the generous vestry.  Immediately below the organ and attached to the wooden panelling is a simple, but moving record of the sixteen men who did not return from the First World War; which was unveiled on 2nd April 1921.

The eight Bankes' family pews are at the back of the church, where presumably they could keep an eye on their tenants and employees in front!  Standing over the pew, is a copy of the Wimborne Minster astronomical clock and above and behind, the west window features the historical family armorials with a fleur de lys and the various bride's arms. Before the building of this church, the window was installed in Wimborne Minster. The pew is served by its own private door on the north side from where a path leads directly to a lane where the family could be conveyed by carriage to and from the great house.  The habit of always leaving during the last hymn, further insulated the family from any risk of contact with the congregation.

Until the building of this church, the people of Cowgrove and Pamphill had to go to Wimborne Minster for services.  However, the new church was within the parish of Wimborne Minster and not a parish in its own right.  This had to wait until 1922, when as a result of Mrs Bankes' efforts and her endowment of £6,000, the benefice of St Stephen's was finally established with its own vicar.  The beautiful grass enclosure in which the church rests remains unconsecrated and consequently has never been used for burial.  The stone cross in front of the church is a memorial to Walter Bankes, Mrs Bankes' husband and benefactor.

The Dorset Historic Churches Trust wishes gratefully to record its sincere thanks to Mrs. Jane Butler for the assistance received in the preparation of these notes.