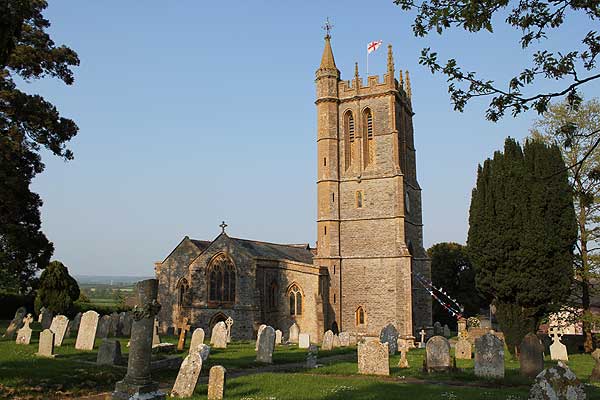 It is difficult to decide whether Stalbridge is a small town or a very large village.  Either way, it is certainly an ancient place being mentioned in the Domesday Book and further evidence suggests ownership by the Abbot of Sherborne in the Middle Ages.  Indeed, the list of known Rectors reaches back to 1342.  By the Reformation, the church consisted of a chancel with north and south chantry chapels, with a rood screen separating it from the nave.  The greensand font bowl with Ham Hill stem is early C13 and there is a C14 piscina in the east wall of the south transept.

The present church is large and stands above most of the settlement, overlooking the Blackmore Vale.    As usual, almost all of the old building was swept away by the Victorians, leaving just an arcade of piers, although the north chapel is Henry VIII.

The first 'restoration' was in 1838 when the old north aisle was doubled in size.  In 1868 the old squat south tower was replaced with a taller and more impressive one designed and entirely paid for the Rev Henry Boucher of Thornhill.  The chancel arch and much else was rebuilt to a design by T.H.Wyatt in 1878, together with the provision of a new carved screen.  It is easy to condemn the Victorians for apparently vandalising old buildings, but in many cases they were left with no alternative, because the previous generation had so neglected their churches that many were in a ruinous condition and at real risk of falling down.  Towards the end of the Victorian era, efforts were being made to preserve the old rather than knock down and rebuild.  Significant too, in the case of Stalbridge, was the fact that the community was expanding rapidly.  By 1880, there were congregations of 200 in the mornings and 400 at Evensong (their total offertory was just £2-0-10 so they were not affluent).  In 1898 the old two decker pulpit was swept away in favour of the current carved oak version.

The church is blest with a magnificent clock manufactured by Burden Brothers of Salisbury and presented by the Rev L.C. Powys during his incumbency of 1837-67. It is the most complicated clock they made and regarded as the best example of their work because in 1896 it was fitted with a carillon that plays seven hymn tunes, one every three hours. The hymn changes each day automatically and they are:

This is a most impressive church that has an uplifting feeling with its high wagon ceilings.

Before leaving Stalbridge, note the really excellent example of a preaching cross outside the Old Rectory, which is generally considered to be the best in Dorset.  Legend has it that it was originally erected by Galfridius de Mervin as a thanksgiving for his miraculous recovery from wounds received in a battle with the Saracens in 1309.

There is an excellent church guide.