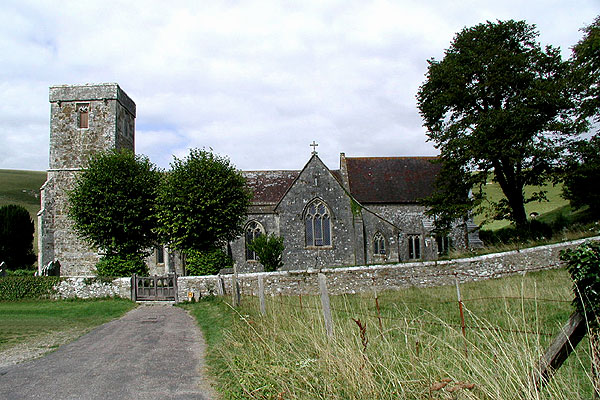 The church rests in a fold in the chalk downland, a little apart from the rest of the village, at the end of a road that it shares with buildings that were once the church school and school house.There may have been a Saxon church here, but it is first recorded when land was given to the great Abbey at Cerne Abbas.  The chancel is C13 and the tower C15.  In 1842, Benjamin Ferry designed a refurbishment of the chancel but, almost everything else was swept away in John Hicks's 'restoration' of 1862/3, including "an old ugly gallery perilously supported on a single iron pillar".  A south aisle and small vestry were added at the same time.  In fairness to the Victorians, it would appear that they had little alternative, because "the greater proportion of the building was in a very dilapidated condition..."Without doubt, the most important feature of this undertaking is the work of the sculptor, Benjamin Grassby of Powerstock.  His skill in crafting the corbels and capitals is a sumptuous bequest to posterity.  Perhaps the most important of his work is to be found in the font. The bowl is of Purbeck marble with medallions of alabaster depicting the emblems of the four Evangelists let into the vertical surfaces.  It is supported at the corners by serpentine columns and a Purbeck marble shaft.  The whole rests on a Purbeck marble plinth found buried under the old floor belonging to the original font.  Grassby's work can be found in a number of Dorset churches. (see North Poorton)The Trust gratefully acknowledges images and text by Robin Adeney ©