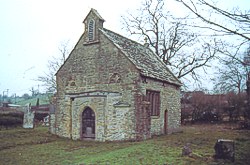 This little building, now redundant, sits on a site beside a busy road that has been occupied by a church since 970 AD.  There is no trace of the original building that would have been served by monks from nearby Sherborne Abbey.The present building dates from 1533, of which only the chancel remains.As was so often the case, the building had been allowed to decay badly and by 1860 the advice was to abandon it and build something else on an entirely new site half a mile away to the north.  And so the old church was demolished leaving just the chancel standing for the next 70 years. (see Oborne New Church)In the 1930s it was restored with the help of the architect A W Powys.  There is an excellent 16c barrel roof and a pulpit dated 1639.  The Communion rails are described as ‘good examples of 17c rustic workmanship’.  The 15c octagonal font came from the now vanished church of North Wooton.  The Trust gratefully acknowledges images and text by Robin Adeney ©