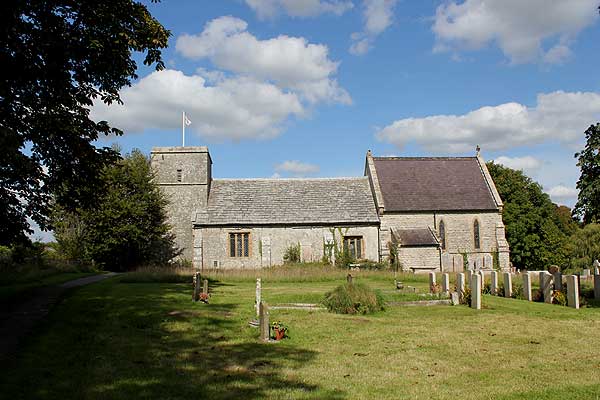 The village of Warmwell is a quiet oasis of tranquility away from the major A352 road to the south. It is bisected by a B road that winds its way through this small settlement.The ancient 700 year old church of Holy Trinity sits in its generous graveyard adjacent to a magnificent manor house, once occupied by John Sadler, a linguist and master of a Cambridge college and who was "much in esteem with Cromwell." He appears to have prospered and held several offices in the Commonwealth, but after the Restoration lost everything, finally dying at Warmwell.Externally, the view of the building must be almost unique in that the chancel is considerably taller than the nave, suggesting some dramatic alterations during its lifetime. The nave is Early English (1200 - 1300), but was obviously restored about 1450 because the windows belong to the perpendicular period (1401 - 1500). The tower was added later at about 1600 by the simple expedient of erecting it against the west wall of the church. Two Cinquefoil windows can still be seen that would have once lit the western end of the church.At the opposite end of the building a Victorian chancel of 1881 has been grafted on. It was designed by R.C.Bennett of Weymouth and physically constructed by the incumbent, the Rev. Edward Pickard-Cambridge assisted by his gardener, Charles Bushrod and two village masons.The C13 octagonal font was fashioned from Purbeck marble. The plain pulpit is C18 and the lectern was presented in 1937.Outside, there are 24 World War II graves of aircrew and other combatants, including one W.R.A.F. that had been stationed at nearby RAF Warmwell. The most striking thing about these graves is just how young these people were when they died for their country.This is an obviously much loved church whose small congregation is struggling to maintain against ever mounting costs. It generously rewards a visit.The Dorset Historic Churches Trust wishes gratefully to record its sincere thanks to Lt.Col J.M. Barrington for the assistance received in the preparation of these notes.The Trust gratefully acknowledges images and text by Robin Adeney ©