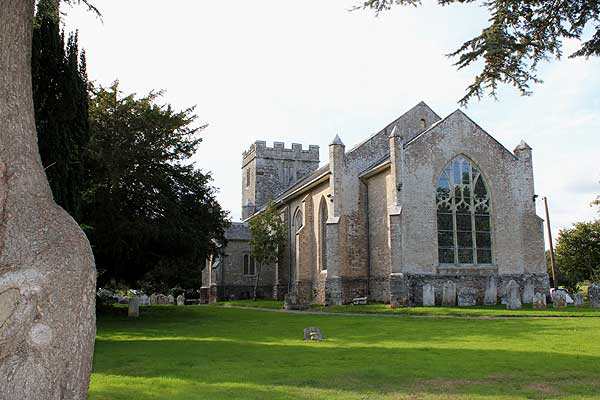 Lychett Minster church occupies a slightly raised site and is adjacent to a building that must once have been the village school.

As with so many Dorset churches, this is another example of Victorian rebuilding of an earlier building. All that remains is the brown heathstone C15 tower to which the architect, John Tulloch of Wimborne, grafted on a new buff coloured brick church in 1833-4.

In the porch, before entering the building, one is struck by a most unusual, but beautiful memorial to Captain James Lees, of the Special Boat Service who died of wounds in 1945. Inside, the large space is lit by generous windows that allow light to flood in and which Sir Nikolaus Pevsner thought might once have been decorated with 'Y' tracery. The chancel is quite shallow and there is gallery at the rear which supports the organ and that extends the entire width of the building. Presumably the lead lined font came from the original church.

The east window glass is impressive and a memorial window to Sir Thomas Lees who died aged 29 in 1915 at Suvla Bay, Galpoli is very moving.