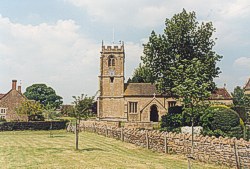 By any standard this is an interesting church.  A building has stood here for 700 years, initially almost certainly being served by Benedictine monks from Sherborne Abbey until the first Rector was appointed in 1405.  Also in the 15c the church was enlarged, given a western tower, a northern side chapel and the nave was partly re-built and covered with a barrel roof, becoming more or less as it is today.Tradition has it that after the Battle of Langport during the English Civil War, Cromwell's troops stabled their horses in the building and "burnt popish furnishings".  (see Corfe Castle)The 15c stone screen between the nave and chancel is most attractive and nearby there is an excellent example of a stairway and arch once used to service the rood loft.  It is much more common to find these apertures partially or entirely blocked-up.  The barrel roof to the nave has moulded ribs and intriguing carved bosses.  The one shown above is of a human face.  Some of the pews are 17c, although some are modern.  The pulpit is Elizabethan with classic blank arches.  Of particular note are the consecration or 'splash' crosses, which can be found both inside and outside the church.  These indicate the position where Holy water splashed against the structure during the consecration ceremony.  The north chapel was originally 15c, but altered by the Victorians when, in 1885, the Gooden family from Over Compton restored the whole building and added a vestry, laid tiles on the floor and installed under-floor heating. The Trust gratefully acknowledges images and text by Robin Adeney ©