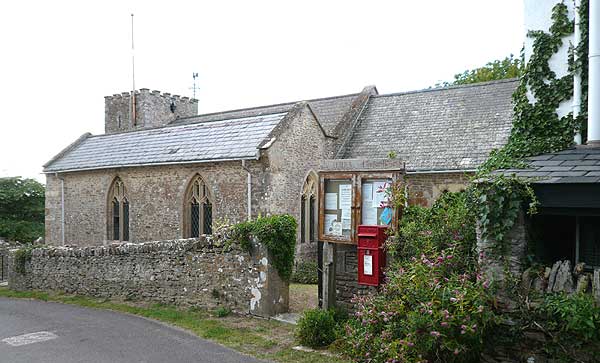 This charming little church stands quite prominently in the centre of the village next to the pub.  There has been a church here for a very long time and with absolute certainty since 1299 when the first rector was recorded.

As with so many churches, this one was 'improved' and enlarged by the Victorians in both 1827 and 1858 when the south aisle was added.  However, the little tower and some lancet windows were left undisturbed.  The font is C15. The chancel rails are C17 and the pulpit was made in 1787.

The charming little three stop organ is by William Hill & Son and Norman & Beard of London.  The attractive case is new and half closing the cabinet doors gives a pianissimo effect for quieter occasions.

Note the large clock on the west wall.  Was this installed to discourage the preacher from over long sermons? Note also the Christian fish symbol, made of stones, which is let into the left side of the path approach to the main entrance in the tower.