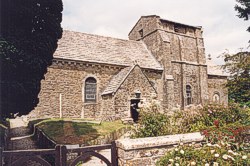 We can be reasonably certain that the erection of the first church to stand on this site was influenced by St. Aldhelm about 1300 years ago.  However the present building is almost entirely 12c and is the finest example of Norman church architecture in the county.  It is a three-cell building with a nave, chancel under a central tower and a sanctuary.  There are some original windows in the north side, the rest were renewed in the 18c and have typical rounded arches.  The tower and chancel arches have good Norman detail and there is excellent vaulting.  The tower with its saddle roof is surprisingly short and this may be because the original builders were nervous to go higher on somewhat insubstantial foundations.  The porch is probably 17c.As with many of Dorset's churches, the building had been allowed to decay to such an extent that by 1880 there was a real fear that it might fall down.  Fortunately, the Society for the Protection of Ancient Buildings had just been formed and we and future generations must be profoundly grateful that their good advice and that of the architect G.R.Crickmay was taken and the church preserved in its ancient form by the building firm of Hardy of Swanage.There is a Norman font and an 18c pulpit.  The west gallery was installed towards the end of the 18c. Note the organ console in the tower crossing operates remotely from the instrument located in the gallery.  It is by Hill and Norman and Beard and was a gift in 1937 to commemorate the coronation of King George VI; the current remote arrangement was made in 1960.Above the sanctuary there is a chamber that can be reached through a door 20 feet up on the north side.  This may well have been used by visiting priests when there was no permanent incumbent, although there are no concessions to comfort in the form of a fireplace.  It has also been suggested that the area was used as a storeroom for contraband by 18c smugglers, notably the celebrated Isaac Gulliver.  Legend has it that illicit alcohol etc. was moved in and out during services, which must have been an excellent cover!