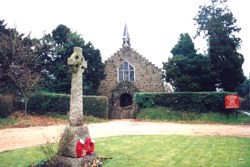 There was a church in Alderholt in medieval times. However it and its graveyard were destroyed by Cromwell's army in 1649, suggesting that the area was strongly Royalist during the Civil War. So for 200 years the parish was without a church, until the present one was built in 1849. The porch and chancel were added later.

Externally, the most striking features are the stepped gable at the west end, rather reminding one of Scottish architecture and the triangular tops to the windows. The inside is somewhat plain, but the Grimston-style pulpit is pleasing and came from St Osmund's in Parkstone, Poole. There is a children's area and the building is obviously very much cared for