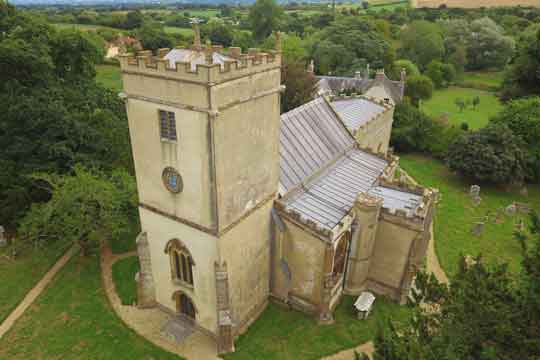 The church rests on the edge of the village near an early C19 manor house.  The building is unique in Dorset because it is the only church to be completely rendered externally.

The nave is essentially C15 and very light and airy, but the chancel, originally C13, was 'improved' several times by the Victorians and the final result is gloomy, despite triple lancet windows and some marble shafting.  The reredos in the sanctuary is brilliantly coloured and by a Mr. Tolhurst of Mowbrays 1927.  Two squints and an aperture high up on the left side, which once led to a rood screen, makes the chancel arch particularly interesting.  There is a C15 font and an intriguing Elizabethan alms box, heavily carved from a single piece of oak.

Very early in the C21 a bequest was received, which funded the building of a superb gallery against the west wall and the installation of a superb new organ.

Above the splendid south porch, with its vaulted ceiling, is a priest's room where once, before the days of vicarages, visiting monks would have been expected to spend the night.  Note, above the door, the small Norman seated Christ.

This is a most interesting church that generously repays a visit.