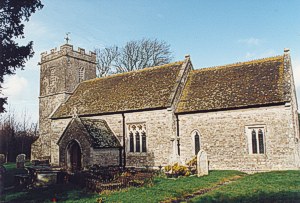 St Michael's is a church that benefits from an attractive village setting.  It is an ancient place, which was recorded as 'Ogre' in the Domesday Book.  The name gradually evolved into 'Oweres' and finally because of the association with  the Le Moigne, into 'Owermoigne'.   Although the first recorded Rector was instituted in 1333, the present building is essentially the result of a Victorian restoration of 1883 to a design by Sidney Jackson of Weymouth and cost of £756.00.  A feature of the design is the square headed windows.  Almost all the wooden furniture and memorials were permanently removed from the building.  The 18c columnar font suffered a similar fate and was found filled with flowers in the rectory garden before being finally restored to its proper place in the church.  The 15c tower did escape the restoration and is known to have been used by 18c smugglers, who used it as a store.  It is more than possible that the Rector knew what was going on, but was kept 'sweet' by finding kegs of the finest brandy left on his doorstep from time to time! (See also Studland).During the reign of King Richard II (1367-1400), Owermoigne came into the hands of the Sturton family as a result of a marriage between Elizabeth, the daughter of Sir John Moigne and Lord Charles Sturton.  Much later the Surtons fell out with the family of Hartgills, but there was much rejoicing at an apparent reconciliation which was sealed  in January 1557 when Lord Sturton invited Hartgill and his son to dinner.  Unfortunately, Sturton's motives were not as pure as the driven snow and during the dinner he had the two men clubbed and murdered by his staff who slit their throats.  He and his men dug a pit 15 feet deep in the cellar where the bodies were deposited.  Later, news of the crime reached the ears of authority and all were condemned to death by hanging at Salisbury.  His Lordship appealed to Queen Mary on the basis of being a Catholic and a nobleman, but the only concession she allowed was that he should be hanged by a halter of silk ..."in respect of his quality."  The sentence was carried out on 16th March and the estate came into the hands of the Crown.  The Trust gratefully acknowledges images and text by Robin Adeney ©