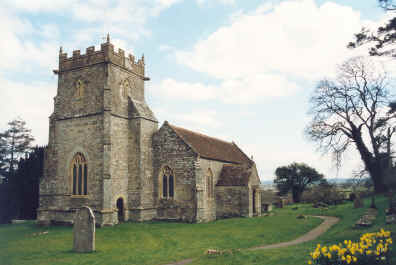 SiltonSt. NicholasIt is possible the church has a Saxon foundation, but the present building dates from the Norman period.  Evidence for this is found in the massive columns supporting the westernmost arches.  Very little is known of the history, but best guesses suggest that the Saxon church consisted of a nave and chancel, to which the South aisle would have been added in Norman times (12c or 13c).  The tower was added about 200 years later and the chantry chapel to the north of the chancel in 15c.In 1869 the then rector, William Percy, who was also the patron, joined the current fashion and 'improved' the church at his own expense.  Much work was undertaken, including moving the Wyndham monument from the Sanctuary to its present position. The old box pews, reading desk and pulpit were replaced with the present ones.  The plastered barrel-vaulted roof was stripped, possibly to insert new timbers.  At about this time the internal roof woodwork was decorated, as were the plastered surfaces of the walls and the stained glass was added.Apart from the sumptuous decoration, the most striking feature of the little church is the magnificent Wyndham monument on the North wall.  This is of Sir Hugh Wyndham, who was Justice of the Common Pleas during the Commonwealth and remained so under Charles II.  He bought the Manor of Silton and died in 1684. The Trust gratefully acknowledges images and text by Robin Adeney ©