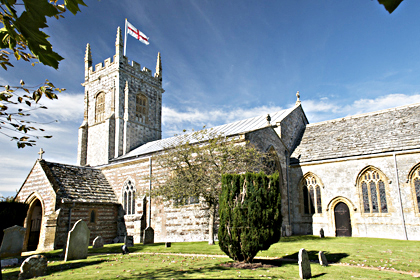 Bere Regis church is one of Dorset's real gems and no tour of the County's ecclesiastical buildings will be complete without a visit.  It is situated in the heart of the village and adjoined from some angles by rather dreary housing developments.  However, this only serves to maximise the grandeur of the church.  During the C13 the area was a royal manor.  Queen Elfrida, the mother of King Ethelred moved here after the murder of her stepson King Edward the Martyr at Corfe Castle.  Much later King John  is known to have stayed here on sixteen separate occasions between 1204 and 1216.  In 1259, the manor was granted to Simon de Montfort, the founder of the English parliament, thus ending royal patronage, although the name 'Regis' stuck.  Perhaps the most famous family associated with the manor were the Turbevilles who became the lords in the C13, but died out early in the C18.  This fact fascinated the novelist, Thomas Hardy, who immortalised them in his celebrated 'Tess of the D'Urbevilles'.  Although the village has existed for more than a thousand years, it has been frequently ravaged by fire.  Perhaps the worst was in 1788 when almost all was destroyed, leaving no building of great antiquity or particular merit.

It is reasonable to assume that there would have been a church in the village during the Saxon period, but the present building originates from 1050 when it was a simple cross shaped structure.  Only three items are still visible, which include a stone corbel, some Saxon "long and short work" and an arch vousoir (shaped arch stone) with diaper (diamond shaped) ornament.  During the C12, a narrow aisle was added to the south side and the three bay arcade formed at the time still survives with pointed arches.  The capitals of the round pillars are interesting because they feature grotesque carvings at the angles with representations of bear-baiting, a monkey's head, a king's head and sufferers of headaches and toothaches.  The font is Norman and decorated with interlacing and flowers.  In the C13, the building was extended both eastwards with a new greatly enlarged chancel and  westwards by an extension of the nave.  The C14 saw only a widening of the south aisle.  Squints, sometimes called a hagioscopes, were installed in both the south and north sides of the chancel arch so that there was sight of the high altar and the raising of the Host could therefore be synchronised in the side chapels.  The south squint is unique in that it still retains its original iron grill and the northern one is nicely aligned with a mirror on the organ so that the organist can see what is happening.  In the chancel, there is a double piscina with a shelf  from this period.

Without question the most important bequest from the C15 is the superb carved nave roof, generally thought to have been the gift of Cardinal Morton (1420-1500), who became Archbishop of Canterbury, Chancellor of England and adviser to King Henry VII.  He was born at Milborne Stileham, then part of the parish.  The roof, much of which is gilded and painted, is constructed entirely of oak and is the most elaborate in the county.  There are full length figures of the twelve apostles extending horizontally over the nave with central bosses displaying the head of Cardinal Morton, his shield, the Tudor rose and a golden cord representing the marriage he arranged between King Henry VII and Elizabeth of York, which ended the Wars of the Roses.

The C16 saw the addition of the impressive tower and alterations and extensions to the north aisle to form the Morton Chapel at its eastern end.  Above the south porch door are a pair of huge iron hooks with chains, which are of this period and were used to pull the thatch off the roofs of cottages that were at risk from an advancing fire.

In common with almost all churches, the Reformation saw the removal of the rood screen between the chancel and nave, leaving just the access stairway.  The C17 pulpit, discarded during the restoration of 1874-5, was later used to form a reredos in the Morton Chapel.  However, we must be very grateful to the Victorian architect, G E Street RA for his incredibly sensitive restoration, which preserved this sumptuous church for future generations.  The glass, mostly by Hardman, is also Victorian and of very high quality.

There is an exceptionally good and comprehensive church guide.