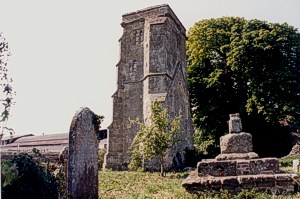 Only the tower remains of the building, which became redundant when the toll road was built around 1870.  It would have been to this church that the Dorset Club Men were taken during the English Civil War.  Note the remains of an ancient preaching cross.  On the 22nd August 1995 the only occupants of the old churchyard were two splendid geese!  (See Compton Abbas).