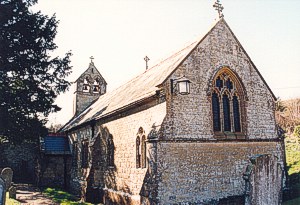 SeaboroughSt. JohnThe little church lies at the base of Bubb Down next to a splendid 17c manor house and a scattering of other dwellings in this remote, but very beautiful, part of Dorset.By far the most important artefact inside is the Saxon font, which suggests that there may well have a very early church on this site.  The decoration is an interesting bestiary with four large animals, including a stag biting a serpent, whose coils entwine the feet of other animals and the whole thing is upside-down!  It was almost certainly the base of an Anglo-Saxon carved cross and was probably hollowed out by the Normans.If there was a very early church here, nothing now remains prior to 1474 when it was rebuilt.  In 1854, the Victorians completely restored the building, leaving only the tower from the earlier structure and re-using some of the stained glass.  At night, it is illuminated with oil lights and the heating is provided by a solid fuel stove.  Musical accompaniment is provided by a harmonium.   The Trust gratefully acknowledges images and text by Robin Adeney ©