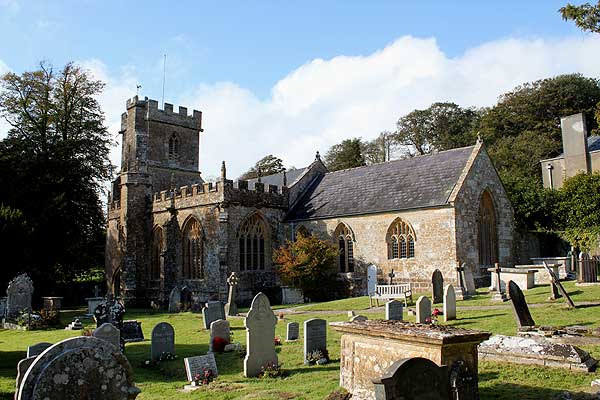 This is an exceptional church set in a beautifully gardened, walled churchyard. Nearby stands the manor house whose lord endowed the church and enjoyed the right to choose the vicar. The Lord of the Manor and his family still sit in the chancel with the incumbent.

The building has Saxon origins and the remains can be seen in the north wall, the chancel and a walled-up doorway opposite the porch. In the C12 the manor was presented by the Earl of Devon to the Abbey of St Mary de Montebourg in Normandy, whereupon some French monks took possession and brought with them the art of cider making. In 1399 King Richard II presented Loders to the Carthusian monastery of St Anne at Coventry. King Henry IV (1399-1413), wishing to placate the French, restored much property to the original French owners, including this and to celebrate, the monks built the Lady Chapel in the 'new' perpendicular style. The chapel was connected to the chancel through what is called an ambulatory (or covered way), which is now partly blocked up, giving the appearance of a squint (or hagioscope). After the Suppression of Alien Houses of 1414, Loders passed into the ownership of the nunnery at Syon at Isleworth (Middlesex).

The C17 and C18 saw religious emphasis change from the Sacramental at the altar to the Word, which required more elaborate pulpit and reading desk arrangements. Hence the interesting stairway, which leads both to the present pulpit and further up to where the rood loft once was. The walls were plastered and painted white so that the interior resembled a non-conformist chapel. However, as with so many Dorset churches, by the nineteenth century the building was in a poor state of repair. Mercifully, due to a disagreement about who was to pay for the repairs, the renovations were delayed until 1899, by which time the somewhat arrogant trend of the Victorians to 'improve' old churches by imposing their own ideas of design had given way to a much more enlightened wish to conserve the nation's heritage.

The bowl of the font was made from Purbeck marble in around 1150, although the stem is later. There is an interior door leading to a spiral staircase in the tower, which is dated at about 1250 and thought to be one of the oldest in the country. A bell of 1626 can be seen to the side of the organ at the rear of the building, which when re-hung with five others in the tower, could not be brought into tune. To save the cost of re-casting, the Lord of the Manor presented a new one, so releasing this one for public view. Of great interest is a new and spectacular altar frontal designed by Jane Lemon and embroidered by the Sarum Group of the Embroiderers' Guild.

The porch has a chamber above, which, before the advent of vicarages, would have been used by visiting clergy as a place in which to stay the night. Especially note the gargoyles because they graphically depict toothache! 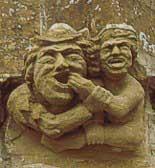