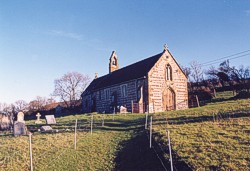 It is a chapel style church set on a hill side all alone, yet there is evidence of an ecclesiastic building having occupied this site for many hundreds of years.  Its origins are now obscure, but are probably 13c.  However, in company with innumerable other churches in the county, by the 19c it had been allowed to fall into a ruinous state.  The architect, R.J.Withers* of Sherborne was given the task of restoration, which was completed in 1848 and incorporated several of the ancient features.

The bench ends are interesting and the position of the Communion rail unusual in that it has been placed at the entrance to the chancel.

* Leigh and Melbury Bubb are also by this architect