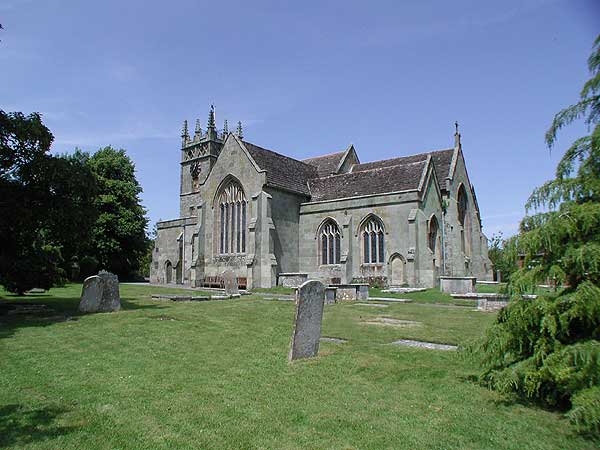 The Parish Church of St.Mary dates back to around 1269 and was built by Abbot John Selwood, one of the last Abbots of Glastonbury, before the Abbey ceased to be, with the dissolution of the monasteries.  Today, the bells ring out from Selwood's tower and the nave, with overhead ,a fine wagon roof, remains with projecting wooden carved angels, not found anywhere else in Dorset.Between 1825-8 the Church was rebuilt at the expense of the Rev Thomas Lane Fox to the design of William Evans.  A new chancel was built, transepts were added and both aisles were extended.  The tower was increased in height, a new organ was provided, and the church reseated.  When he died in 1861 Thomas Lane Fox left only £2-19-5d, his whole fortune of some £100,000 having been spent on the church and his parishioners.The Church is noted for its eight stained-glass memorial windows.  Two are by Mary Lowndes (1857-1927), Britain's first stained-glass maker and an activist for women's rights.  The "Nativity" in the West Tower in memory of her mother was the first window she made.  The "Resurrection" in the Warrior Chapel commemorates her father, Vicar of Sturminster for 36 years.  Most remarkable is the SE aisle window by Harry Clarke of Dublin 1921.  This was made in memory of Roma, wife of Sir Drummond Spencer-Smith, who is buried in the churchyard with her husband.  It is a pure Art Deco design of three women saints standing in a frieze shoulder to shoulder, with the Virgin and Child in the centre.  It was made by Harry Clarke himself in Dublin using ancient "slab-glass" technique and medieval colours. Sir Owen Morshead, the founder of the Dorset Historic Churches Trust, who lived in Sturminster and worshipped at St. Mary's, called it "rich in textures, gorgeous in colour".Other features of the Church are some fine woodcarving including a lectern commemorating William Barnes, the Dorset poet born in the Parish, and a magnificent Wellingtonia tree in the Churchyard.The Dorset Historic Churches Trust gratefully acknowledges the above contribution prepared by Major General J.O.C.Alexander, CB, OBE