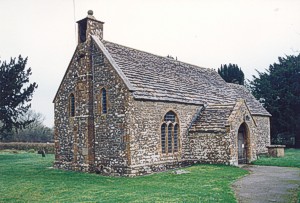 HermitageSt. MaryThis church is in a most attractive and peaceful setting adjacent to an 18c farmhouse.  As is often the case, the origins are obscure, but it is certain that in the 14c there were a group of hermit friars here following the rule of St Augustine and enjoying the patronage of King Edward I (1239-1307).  By 1460 the friars had gone and it had become a free chapel with its own priest.  In 1514 it was annexed to Cerne Abbey and after the Dissolution of the Monasteries it became a perpetual curacy under the Crown.  This arrangement continued until 1935 when the then Prince of Wales (later to be Edward VIII) transferred the Hermitage and Hilfield Village School to the people so that it could be used as a Village Hall.The present church was extensively restored during the 17c and rebuilt in 1800.  There was once a tower at the west end, which included a room to house the curate and there was a chamber over the porch which accommodated a bell and wood for his fire.  The single bell in the stone bell-turret is dated 1795 although the bell-wheel was rebuilt in 1990.  During the Second World War (1939-45) several pictures from the Bournemouth Art Gallery were hung in the church to reduce the risk of damage from bombs.  The small picture in the nave was a gift in memory of the assistance given.  To the right of the altar, note the very sensitive Madonna and Child.The Trust gratefully acknowledges images and text by Robin Adeney ©