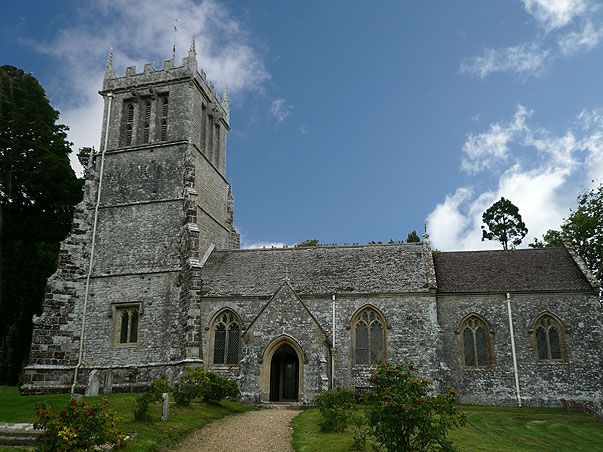 Resting in parkland among some really splendid mature trees with glimpses of the castle behind its magnificent C15 tower, this otherwise rather plain Victorian building has been invested with great charm.

There has been a church here for a long time and the list of known vicars stretches back to 1312.It has been rebuilt at least twice.  As with many churches in the county, it had been allowed to decay to a ruinous state and by 1785 a faculty to rebuild most of it, together with an apsidal chancel, had been applied for.  It is likely the design was by John Tasker, who was also responsible for the enchanting nearby Roman Catholic chapel - both buildings being funded by Thomas Weld.The second rebuild of 1864 is by John Hicks of Dorchester, who was responsible for more restorations in the county than any other architect working at the time.

Thomas Hardy, the author, was articled to him.  Apart from the tower, he swept everything away, including the apse, and added a vestry.  This was certainly radical surgery, but there is a curious and very pleasing harmony about the finished work.